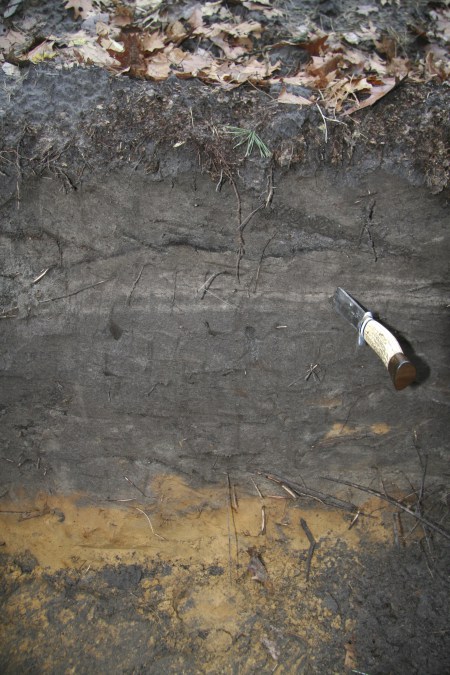 Each month we ask a soil researcher to select his or her favorite soil. This is the favourite of  Prof. Karen Vancampenhout of KU Leuven Technologiecampus Geel, Secretary-General of the Society:

SSSB: If you have to choose a favorite soil, what would it be?
Karen Vancampenhout: an Anthrosol

SSSB: What are the main properties of this soil type?
Karen Vancampenhout: Anthrosols have a typical accumulation of organic material in the upper 50 cm, which was added through human activities, i.e. charcoal, household waste, irrigation or cultivation. My favorites are the ‘Plaggic Anthrosols’, formed mostly in sandy soils by adding sods collected from heathland areas (‘plaggen’). These plaggen were put in a special stable to compost and soak up nutrients, called a ‘potstal’. They are common near village centers in the sandy Campine area of Belgium. They also occur in the sandy regions of the Netherlands and Northern Germany.

SSSB: Why do you find this soil type particularly interesting?
Karen Vancampenhout: As an organic matter specialist born and raised in the Campine area, I am intrigued by the fact that these soils still contain so much organic matter, although the ‘plaggen’-practice went out of fashion over 300 years ago due to privatization of common lands and the development of chemical fertilizers. People of this area are said to be very stubborn, and apparently so is the organic matter in their soils.

SSSB: Do the properties of this soil type have consequences for it’s management, e.g. in terms of land use, soil quality, conservation..?
Karen Vancampenhout: When you live on a sandy soil, you don’t have a lot going for you: the sand drains very quickly, leaving crops vulnerable to drought, and has almost no surface charge, meaning that the soil can’t hold on to nutrients. This all changes if you add organic material to the equation: it supplies nutrients to plants, helps the soil hold on to water and supports the soil’s beneficial biodiversity. The Anthrosols still are the best farming soils in the Campine area, but their historical proximity to village centers means that a lot of them end up under concrete.

I also like Anthrosols because they show people in a very tangible way the importance of organic matter in soils. Looking at the thick anthropogenic horizon it’s easy to imagine the trouble farmers went through for over a thousand years, extracting the sods in the common grazing areas and heathlands, dragging them to their homes and stables several kilometers away and putting the fertilized sods back on their fields, all of it by hand. Often there was a spodic horizon as well, a subsoil horizon rich in organic matter and a remnant of the former natural soil. They used to dig that one up by hand as well over vast areas, to break up cemented horizons or to add the organic material to the surface soil to help their crops grow. You just don’t do things like that unless it’s absolutely vital for your livelihood.

SSSB: Can you tell us your most memorable story concerning this soil type?
Karen Vancampenhout: When I was a very young child my grandfather had a really nice garden in the Campine area. Seeing all the plants grow fascinated me, so one day I nicked some of his bean seeds and planted them in my sandbox. I watered them religiously but nothing happened, while his were growing far above my head. When I asked him about it he explained that his soils where nice and brown, while the sand in my sandbox was white. He said that it was important to add organic materials to the soil and showed me his compost pile, which to me seemed really huge. I decided my grandfather had magical powers, turning kitchen waste into brown soil that could grow beans. Many years later I realized that the house of my grandparents is in fact standing on an Anthrosol.

Karen Vancampenhout is a professor at KU Leuven Campus Geel, where she teaches soil and water related subjects. Her main research interests include soil organic matter, forest soils and the interaction between farming and the environment. She also works in the South, with projects in Ethiopia, Uganda and Peru.