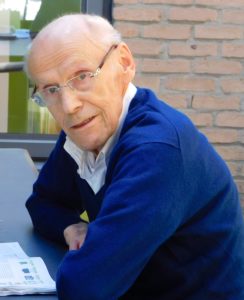 Dr. ir. Jan Frans De Coninck, Honorary Professor of Soil Science at the Faculty of Sciences of the Ghent University in Belgium died on June 10, 2017 at the age of 91. “Frans”, as he was known to friends and associates, was a distinguished and inspirational soil scientist, well respected by his peers and especially by the many generations of MSc and PhD students, coming from all over the world, he taught and supervised in the 1970s and 1980s at the International Training Centre for Post-graduate Soil Scientists at Ghent University in Belgium. His professional experience included: soil survey, soil chemistry, soil mineralogy, soil micromorphology and soil genesis. He established an international reputation for his research on the genesis and properties of Spodosols/Podzols.

Frans De Coninck was born on April 24,1926 in Diegem, Belgium and grew up on a farm in the neighborhood of Brussels as the youngest of a family with 7 children. He had always the idea to become a “scientific” farmer. But at the Catholic University of Leuven he was so attracted by chemistry and soil science that the scientific activities became more important than the real farmer activities. He prepared a thesis in soil science and was awarded the degree of Agricultural Chemistry Engineer in 1948.

After his military service and a short time as a Chemistry Engineer in the private sector, he joined in 1951 the Belgian Centre for Soil Survey, and this was the beginning of a brilliant career in soil science. He was chief cartographer and soil correlator in the Antwerp Campine.

When soil survey became too much a routine for him, he started in 1959 to study soils, mostly sandy and glauconiferous soils of his survey area, under the microscope in collaboration with Dr. Jacques Laruelle from Ghent University. Because the microscopic research left many questions on composition and mineralogy of these soils unanswered, Prof. Dr. René Tavernier, Director of the Soil Survey Centre, proposed him in 1963 to carry out a thorough fundamental study on the mineralogy of the soils of the Antwerp Campine, as a part-time researcher at the Laboratory of Mineral Chemistry at the Catholic University of Leuven. In this laboratory he joined a world-famous research team under the coordination of Prof. Dr. José Fripiat and he got acquainted with a series of new analytical techniques in soil chemistry and mineralogy. He gained his PhD in Agronomy in 1967 from the Catholic University of Leuven for a thesis entitled Physico-chemical Aspects of Pedogenesis in the Antwerp Campine and was appointed Head of the Laboratory at the Department of Regional Pedology of the same university.

In 1968, Frans De Coninck joined the Ghent University and became Head of the Laboratory for Soil Analyses at the Department of Physical Geography and Regional Pedology (Head: Prof. Dr. René Tavernier); a position he held until his retirement. His research interests included the investigation of soil forming processes and mineralogy of soils from all over the world, but preferentially Podzols. His investigations on spodic materials showed the usefulness of soil micromorphological information in studies of Spodosol genesis. He did groundbreaking research, especially in micromorphology of Podzols in close collaboration with French soil scientists, i.a. Dominique Righi, and contributed in this way to the improvement of the classification of Spodosols in Soil Taxonomy. His research findings on podsolization were compiled in a book “Genesis of Podzols” with which he obtained in 1981 the Aggregate for Higher Education and became in 1982 the Laureate of the Royal Academies for Science and the Arts of Belgium.

Dr. De Coninck was active in several professional societies. He was Vice-President of Commission VII (Soil Mineralogy) of the International Society of Soil Science and European Coordinator of the ICOMOD-Commission (Spodosols) of the Soil Conservation Service of the United States Department of Agriculture (USDA)..

In 1989, Dr. De Coninck was appointed Associate Professor at the Laboratory for Regional Pedology and Land Evaluation, Ghent University. After his retirement in 1991, Prof. Dr. De Coninck was until 1996 still active as the chairman of the Soil Experts Group of an International co-operative programme on assessment and monitoring of air pollution effects on forests in the ECE region, sponsored by UNEP-UNECE.

Our MOOC on tropical soils is among the 10 finalists for the 2020 edX prize for exceptional contributions in online teaching and learning! And it’s free! Want to learn about soil classification or soil management in the tropics? Look no further! @KU_Leuven @ISRICorg @Arwyn_Italy https://twitter.com/edxonline/status/1321816663013076993